WAUPUN — New wayfinding signs pointing to landmarks in Waupun have finally been put up around town. This comes after discussion over alteration of the signs rested at the Waupun City Council meeting on July 12th.

The new wayfinding signs bear the current city administrative logo from the 2017 rebranding initiative. They replace the old blue signs which displayed a silhouette of the End of the Trail statue and the historical city tagline of “City of Sculpture.”

Mayor of Waupun Rohn Bishop disagrees with the design used for the new wayfinding signs, believing it doesn’t properly represent what Waupun really is. Mayor Bishop placed the signs on hold to ask the City Council to have the signs altered to put the End of the Trail over the city logo. But when it was brought to the City Council last month, they decided to put them up without alteration.

Despite the matter being considered settled after the previous meeting, Mayor Bishop insists on there being a vote at the August 8th meeting next week. Mayor Bishop asserts that city residents are passionate about city branding but did not know about the meeting, and deserve a chance to speak to the Common Council.

Public Works Director Jeff Daane noted it would not be difficult to place decals on the signs after installation at the July meeting, should the Council decide to alter the designs.

Mayor: “Stop Removing References to the End of the Trail” – Opinion 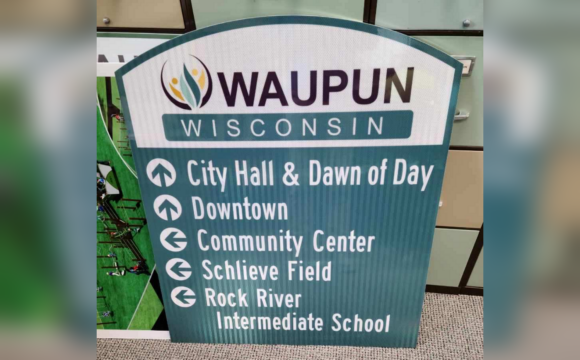